Well I’ve had a pretty interesting night to say the least lol. My flamepoint Siamese is massively shedding his winter coat and my house looks like it snowed fur so I had to not only brush him but give him a bath, and let me tell you it wasn’t pretty lol. But hey at least he’s clean 🙂

Anyone know how to naturally reduce shedding on a cat? I use young living oils and I’d like to use them to help shedding but I’m not sure how to go about it. Meh.

Anywho, I think me and the hubs figured out our income issue, hubs is going to apply to be SDPD! We found out that his ticket won’t effect his application so all we gotta do is try some practice tests and prep him for the physical portion. Heh easier said than done right? Also, I spoke to my mother-in-law and she is gunna pay me to be her assistant at the preschool she works at, it’s pretty easy too it’s basically just prepping her classes the day before, and helping her with clean-up. So that’s epic.

Well that’s it for tonight, this momma has to finish laundry and get to bed, later!!
Live life laugh lots and love always❤️

It has been so hectic in my family’s lives lately! First off, my husband works as a security guard for company “1”, (not the real name haha) and company 1 has him at a site I’ll call site 1, well site 1 has decided to switch to another company, and for the longest time we were under the impression that would leave him jobless! Well last week we found out that company “2”, the new security company, has decided to hire all the current guards to cut costs on training new guards for this site, so hubs gets to keep his job in a way!!! Yay! Well anyways, they did a background check during the application process and found that he has a suspended drivers license that we never knew about!!!! So now, he has to get rides from coworkers to and from work until we figure out why and how this all happened. The weird part is that he hasn’t had any tickets in YEARS!!! and he recently had a DMV report check from Chevy for our leased Chevy Cruze, and nothing was on it, so now we are wondering if this is possibly a mistake, because my uncle cosigned the lease so we would have a reliable vehicle to take our son places (our old car was a 1988 Mazda piece of junk that was falling apart and only had one rear seatbelt and no front ones, it was a gift from a friend so to speak) safely. Anyways, my uncle has had a suspended license for a year now, so we are wondering if it somehow showed due to that, the only other possibility is that someone lied and used his name when they were stopped. We don’t know what to think about this, it’s been so stressful, him starting this new job had so many more possibilities, but now he can only take the same site 1 that he was at before, and he had wanted to pick up some driving positions and can’t now. I was under the impression that to actually have your license suspended they had to notify you and you had to appear in court and take some class or whatever, but we never got anything in the mail. We are in California, so if anyone in California, if you know anything pertaining to this it would be awesome! We are totally clueless.
On a good note, I am absolutely in love with our recently adopted Icarus😻 I’m in the process of making him a little Crocheted Cat Cubby and it’s coming along great! He already loves it, I finished one side of it and he’s been laying on or under it all night haha!!! (See photo above) he is such a sweet lovey little guy and he has been my comfort thru all of this massive stress, cats are so awesome!

Well I’m done with my vent for the night.

How was your New Year celebrations? Mine was pretty mellow, my hubs worked so my New Years kiss was my little prince!

Anyways, since my last blog we adopted a beautiful flame tip Siamese cat named Icarus😻😻😻!! He’s such a sweet and lovable cat, and he is the perfect addition to our little family❤️🐱❤️🐱 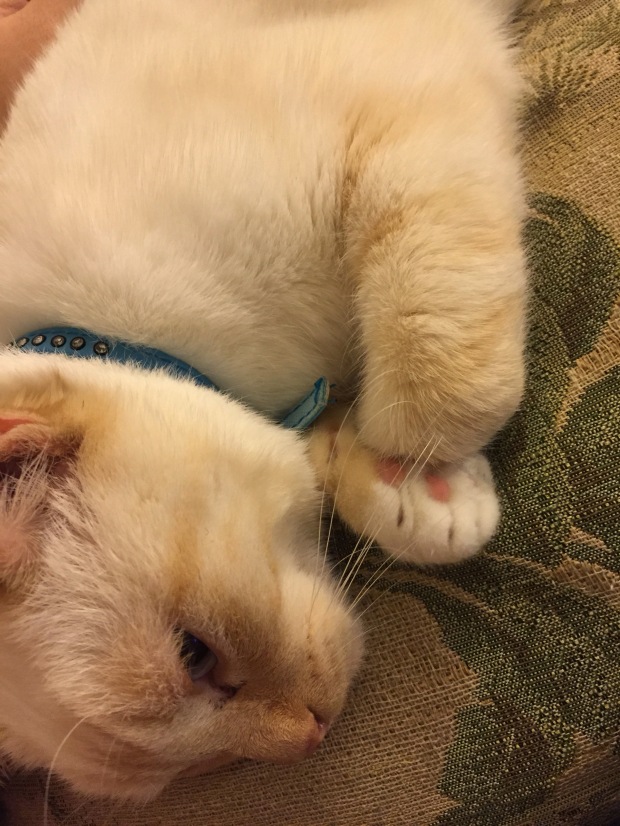 Little bean toes!!! Well I don’t really have very much to talk about lol. Let’s see some pics of your fur babies in the comments!!!